Jason W is a 46-year-old male who has suffered low back pain, on and-off, for about six months.  He is a teacher for special education who caught a student when the student was falling and about to hit the corner of a desk, at which moment he felt sudden onset low back pain.  The pain was so severe he was unable to stand, and felt weakness with the pain radiating to his left leg and causing a tingling and numbness sensation there.  When he was brought to my office, he was unable to stand but had to talk to me from a prone position on an examining table.

About one year ago Jason had a similar experience with a student and, at that time, felt the same sensations of low back pain, which radiated to his left leg, and accompanied with tingling, tenderness, numbness and heaviness of his left leg.  He consulted his primary care physician who diagnosed acute low back sprain, and prescribed anti-inflammatory medication and bed rest.  After two days he felt a little better however, since then, he has experienced pain off and on and also feels his lower back is weak.

At present, he finds it difficult to hold his low back, and his left leg is heavy and he has difficulty raising it, he cannot bend forward with any ease and has trouble donning his pants.  He also has difficulty picking up objects such as a pen from the floor and is experiencing a bit of urinary incontinence.

The patient is moderately obese and has a somewhat large abdomen, so I asked him to stand straight then bend forward.  He was unable to  perform this maneuver and immediately felt back weakness, and had difficulty bending forward more than 40 degrees.  When I asked him to walk on his tiptoes and heels, he was unable to do so, and he reported when he walks on his heels he feels low back pain radiating down the left leg, especially around the lateral of the knee and lateral to lower leg.  I also performed a straight leg raising test.  On the right side the patient could do straight leg raising by about 80 degrees, however, only 50 degrees on the left side, at which point he feels the pain radiating again down to the leg and knee.  I used a pinprick to check the patient’s response to sharpness and cotton ball to check his light touch sensation. Both tests showed decreased sensation along the left lateral thigh and leg.  I also checked his deep tendon reflexes, which showed the left knee jerk and left ankle jerk to be about 1+.  By examining the strength of his left leg, his ankle dorsal flexors are 3/5 and the ankle plantar flexors are 4/5, the knee flexors and extensors are 3/5, The rest are 5/5.

Because of the severity of his condition, I ordered a lumbar sacral MRI which showed severe L4/L5 herniated disc with a left protrusion. 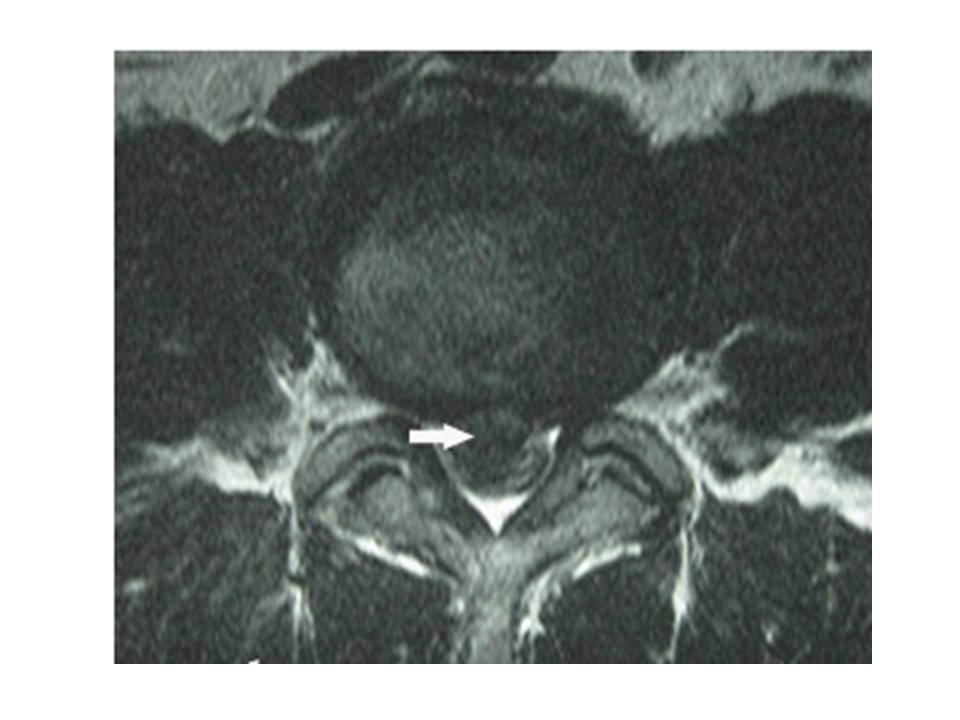 From that above MRI pictures, you may see the arrows indicate the herniated disc from Jason’s Lumbar spine.

Jason appeared to have left L5 radiculopathy.  Because the above image showed severe herniated disc between L4/L5, he was immediately referred to a neurosurgeon.

After careful examination by a neurosurgeon, he was advised to have emergency surgery for discectomy, i.e. a small incision to cut off part of his herniated disc,  based on his emergency symptom, such as, severe low back pain radiating to left leg with numbness and tingling sensation, and slightly urinary incontinency.  Jason agreed the surgery.

Low back pain is the secondary most common injury to cause workforce loss in the US and almost everyone has experienced this kind of pain sometime in lifetime.

Low back pain has many different manifestations, the causes of which follow:

1.     Myofascial or tendon ligament sprain.  This is acute pain in the muscles that can come from poor posture, tendon ligament injury, or from overuse or overstretching.

2.     Radiculopathy which is a pinched nerve, usually originated from a herniated or slipped disc pinching one of the lumbar sacral roots as indicated from above MRI pictures.

3.     Spinal stenosis and narrowing of the nerve opening either around the spinal cord or nerve roots that cause symptoms similar to pinched nerve.

4.     Overuse and overstretch of ligaments of facet and sacroiliac joints.

5.     Fracture of the vertebrae caused by significant force such as an automobile or a bicycle accident, or a fall.

6.     Scoliosis or kyphosis, i.e. the spine curves changed in a wrong way.

7.     Compression fracture, which is common among postmenopausal women with osteoporosis.

There are also some less common spinal conditions capable of causing low back pain, including:

1.     Ankylosing spondylitis, which is a severe bony fusion of lumbar sacral spine and pelvic bone with unknown reasons, the patients have difficulty straight their back, and sometimes, are unable to look at sky.

2.     Bacteria infection such as osteomyelitis, etc.

4.     Paget disease: a bone disease in which the bone is unable to keep the balance of remodeling process, i.e. to lay down new bone and take up old bone for the purpose of rebuilding the bone. As a result, the bone  formation is abnormal with loose bone structure, and enlarged and low density bone, which are brittle and prone to fracture.

5.     Scheurmann’s disease, in which bones of the spinal vertebrae develop wedge-shaped deformities, i.e. the vertebrae grow unevenly, that is, the anterior angle is often greater than the posterior, results in the wedging shape of the vertegbrae and kyphosis.

Diagnosis:  The symptoms and physical exam usually give a good idea as to the correct diagnosis.  However, it is important to also have the following tests performed:

2.     MRI will indicate the hernia disc and nerve impingement, facet joint osteoarthritis and also give a clear view of degenerative changes of the disc.

3.     Electromyograph (EMG) which is divided into two parts.  The first is nerve conduction study in which electrical stimulation is used to stimulate the nerves in one extremity.  The machine then checks the velocity of the nerve travel and the amplitude of each individual nerve, which is then compared to the opposite or paired extremity.  If there is any difference in the velocity and amplitude, as well as the latency, it is possible to differentiate among the nerves and determine which are injured  The second part consists of an electromyography, during which a small needle is inserted into certain muscles of the spine and extremities, if the muscle is injured, it will show up on the screen, which will pinpoint which nerve roots are injured.

4.     Lumbar myography.  This is radiographic examination of the lumbar spinal canal with  intrathecal injection of contrast medium.  After injection, X-rays are taken and show if any nerve roots are impinged.

Based on the clinical symptoms and physical examination plus one or all of the above tests, a clear diagnosis of lower back pain can be made.

1.     Nonsurgical.  Most physicians recommend non-surgical treatment before resorting to surgery.  The following are usually recommended:

a.     Anti-inflammatory medications such as acetaminophenm Advil, naproxen, etc. and muscle relaxants such as Valium, Skelaxin, etc. which probably help relax lower back muscles.

b.     For a more severe condition, a lumbosacral brace or binder is usually recommended, which gives the patient support in the lower back.  However, continued use of the brace can lead to muscle weakness of the lower back and should therefore only be used for such activities as driving, lifting the baby or some heavy object, etc.

c.      Traction.  If the patient is diagnosed with a herniated disc, the usual treatment would be traction.  The patient is placed on a folding bed, then the an attempt is made to slightly pull apart the patient’s vertebral body.  It is possible for the herniated disc to return to its original position. The traction is not indicated for other lower back pain such as myofascial sprain, spinal stenosis, or spondylolithesis, and the traction must be guided by a physician.

d.     Physical therapy, which helps the patient strengthen the abdominal and leg muscles, which will alleviate the back pain; a strong abdominal muscle helps in holding the entire trunk.

All the acupuncture points are chosen along the nerve distribution and it is typical to stimulate these points with electrical stimulation and combine this with Moxibustion and massage, all of which greatly helps the patient. 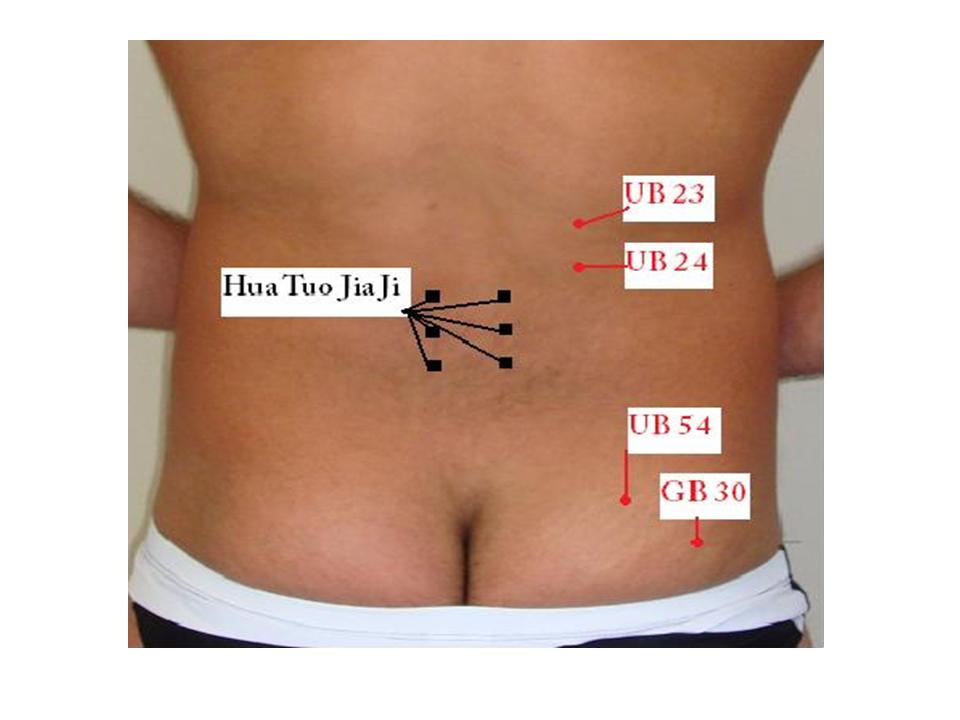 Surgery is the last resort and there are several surgical options.

1.     Discoctomy surgically cuts into the herniated disc to decrease the compression of the nerve root.

2.     Laminectomy is used if the discetomy is not successful; in this surgery a piece of the bone is out to release the impinged nerve root.

3.     Fusion. If the vertebral body is unsteady, and cannot hold together, it is necessary to use a rod or bone chip to fuse the vertebrae which protects the nerve from further impingement.

Jason was diagnosed with left L5 radiculopathy. He was treated with me with the combination of both western and Chinese medicines. I first used Hua Tuo Jia Ji with 9 needles and other adjunct points as above, I also used heating pad, massage, traction machine for 90 lbs 20 min, for stabilizing his low back, I prescribed customized lumbosacral corset, i.e. back brace. He was treated with me three times per week for 8 weeks.

Gradually the pain subsided, Jason felt less weakness on the leg and the burning and tingling sensations went away and eventually he returned to work but continued his visits with me for maintenance once every two weeks or once a month.  After 6 months, he then consulted the neurosurgeon again who felt surgery was no longer indicated, based on the low intensity of his lower back pain.

1.     It is absolutely necessary to make a clear diagnosis, Differentiate acute and chronic lower back pain, differentiate muscle sprain from herniated disc and spinal stenosis and radiculopathy, because only in this way can the prognosis be predicted.  For example, if the diagnosis is muscle spasm, acupuncture can make the patient experience a quick recovery and greatly lessen the pain, and he/she can  most probably return to work after only one or two days.  However, if the patient has a herniated disc or spinal stenosis, acupuncture probably will help, but it will be a long recovery, probably two or three months.

2.     Treatment:  Most patients opt for non-surgical treatment first.  However, if the pain radiates down the leg, with numbness, tingling down the leg, combined with urinary incontinence, it is very important to have an MRI and CT scan or X-ray to make sure there is no significant herniated disc or spondylolisthesis or spinal stenosis.  If a severe medical condition is confirmed, then it is best to refer the patient to a neurosurgeon.

3.     Acupuncture can treat a herniated disc, especially if combined with traction and massage.

4.     A lumbosacral corset is also a great tool to help a patient move around with less pain.

1.     Identifying the symptom, if you feel your low back pain radiating down to the leg with numbness, tingling sensation and weakness, sometimes accompanied with slightly urinary incontinency, you have to make your doctor to order MRI to make a clear diagnosis.

2.     If it is acute or chronic low back sprain, you may need a few acupuncture treatments with massage and heating pad, if it is low back pinch nerves or herniated disks with above symptom, you have to ask your acupuncturist to use Hua Tuo Jia Ji points accompanied with massage, heating pad, even traction machine, if they are legally allowed to do so.

3.     Low back brace always helps  you to reduce your pain, however, you can not use it for 24 hours a day, you should be aware that the brace has side effects, which may weak your low back and abdomen muscles if you use it too long time. You only can use it intermittently. While you are at home, do not use it.

A team of physician working to ensure you receive the best treatment.

Copyright 2020 by BoldThemes. All rights reserved.